U.S. Background Screening – Laws by State in the USA

Here are public records in each state.
Click your corresponding state below and learn more about your specific situation.

U.S. Network for Education Information for:

Tribal Courts in the United States

The American Council on International Personnel (ACIP) is a leading voice and resource for employers working worldwide to advance employment-based immigration of highly educated professionals.

Use of Credit Information in Employment 2012 Legislation

To date, 39 bills in 20 states and the District of Columbia have been introduced or are pending in the 2012 legislative session. Out of the total 39 bills, 38 address restrictions on the use of credit information in employment decisions. The total number of states that limit employers’ use of credit information in employment is now seven: California, Connecticut, Hawaii, Illinois, Maryland, Oregon and Washington.

Specially Designated Nationals (SDN) and Blocked Persons
16 June 2004, revised 2 May 2005. The U.S. Treasury Department, Office of Foreign Assets Control (OFAC) publishes this list of individuals and companies controlled by targeted countries. The list includes “individuals, groups, and entities, such as terrorists and narcotics traffickers designated under programs that are not country-specific. Collectively, such individuals and companies are called ‘Specially Designated Nationals’ or ‘SDNs.’ Their assets are blocked and U.S. persons are generally prohibited from dealing with them.”

List of Parties Debarred for Arms Export Control Act Convictions
21 June 2004. The Directorate of Defense Trade Controls of the U.S. Department of State provides two lists–one statutory and one administrative–of companies and individuals convicted of violations involving the Arms Export Control Act (AECA) or the International Traffic in Arms Regulations (ITAR). Both lists are alphabetical and include a Federal Register citation, although not a link to the relevant issue.

Entity List
16 June 2004, revised 2 May 2005. The U.S. Bureau of Industry and Security (BIS) maintains this list of foreign individuals and companies, which “have been determined to present an unacceptable risk of diversion to developing weapons of mass destruction or the missiles used to deliver those weapons.” Changes to the list appear officially in the Federal Register.
Terrorist Exclusion

OIG & GSA Sanctions Report
The OIG & GSA search utilizes the U.S. Dept. of Health and Human Services and the Office of Inspector General’s database for individuals and businesses excluded or sanctioned from participating in Medicare, Medicaid, or other Federally funded programs. If an organization employs an individual on these sanctioned lists they may be forced to pay back all Federal funds received via these programs going back to the date the person was employed. Therefore, the OIG and GSA search is vital for healthcare industries.
The search is comprised of the following components: OIG (Office of Inspector General), GSA (General Services Administration), FDA (Food and Drug Administration), DEA (Drug Enforcement Agency) and action taken by licensing boards in all 50 states.

Office of Foreign Asset Control (OFAC) of the U.S. Department of the Treasury

The following lists may be relevant to your export or re-export transaction:

Denied Persons List: A list of individuals and entities that have been denied export privileges. Any dealings with a party on this list that would violate the terms of its denial order is prohibited.

Unverified List: A list of parties where BIS has been unable to verify the end use in prior transactions. The presence of a party on this list in a transaction is a “red flag” that should be resolved before proceeding with the transaction.

Debarred List: A list compiled by the State Department of parties who are barred by §127.7 of the International Traffic in Arms Regulations (ITAR) (22 CFR §127.7) from participating directly or indirectly in the export of defense articles, including technical data or in the furnishing of defense services for which a license or approval is required by the ITAR.

Nonproliferation Sanctions: Several lists compiled by the State Department of parties that have been sanctioned under various statutes. The Federal Register notice imposing sanctions on a party states the sanctions that apply to that party. Some of these sanctioned parties are subject to BIS’s license application denial policy described in §744.19 of the EAR (15 CFR §744.19).

What is FOIA?
Freedom of Information Research 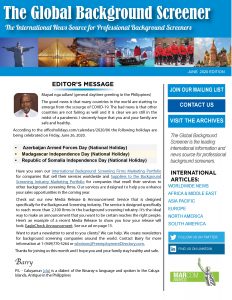 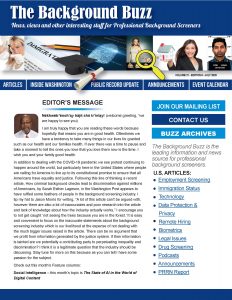