Grab a latte, sit back and join us for an ‘electrifying’ interview with Vince Brodt, SJV, Vice President of Client Experience

Pull up a chair, get a latte and join us this month for a very special guest, Les Rosen, author, The Safe Hiring Manual (3rd edition).

Les shared that prior to starting his journey in the background screening industry he had served as a civil litigation attorney in a large law firm in Southern California and then went to the Riverside County District Attorney’s Office. After this he became a criminal defense lawyer in Northern California and tried numerous jury trials including murder, deathpenalty, and complex federal trials. He also taught trial advocacy and served as an adjunct law professor.

He retired in 1996 and began traveling around the world. Les said, “After a year of being on the road, I came back to the U.S. and eventually decided to start a new career. A criminal investigator I worked with did background checks for employers and based on my experience with criminal law and interest in technology, starting a background screening firm seemed like a good idea.”

He added, “As a lawyer, I started to write articles about screening since there was practically no legal compliance information publicly available at the time. Steven Brownstein, one of the early innovators in the screening industry, held the first ever industry meetings in Long Beach, CA. I was the keynote speaker at his Long Beach meetings, and later at his Florida conferences. Steve’s meetings lead to the formation of the National Association of Professional Background Screeners (NAPBS), where I served as the chair of the committee that founded the association and was the first co-chair.”

Les note that he wrote the first edition of “The Safe Hiring Manual” in 2004 and the third edition came out in January 2017.

He reflected for a moment and then mentioned that he had also started and later sold ReferencePro, which was the first firm to perform outsourced credential verifications, which has now a common practice.

Les shared that, one of the things that he likes about the background screening industry is the fact that even though I have been involved in the industry for some time, he is constantly learning new things. He chuckled and said “The screening industry never stays still. When you understand the complexity of what we do, there is always something new.” He smiled and added he has also made a number of great friends in the industry.”

Turning the conversation to the release of the third edition of his book, The Safe Hiring Manual, he said, “When I started Employment Screening Resources (ESR), the goal was to approach screening from a legal compliance and solution partner viewpoint, taking every effort to get employers the most accurate information possible, rather than just sell data. The purpose of ‘The Safe Hiring Manual’ was to help employers understand all the moving parts associated with safe hiring, and that background screening is a professional endeavor and not just a matter of data retrieval.”

The new third just came out this month and It is bigger than the previous edition, with a great deal more content, and re-organized to find material faster. Les added, that he was very pleased that a number of leading lawyers also contributed columns to the book. He noted that Mike Sankey of BRB Publications and ESR News Editor Tom Ahearn also played a big part in getting the third edition out the door.

Moving the conversation to my favorite question about looking into a crystal ball to see what’s coming down the road in the background screening industry, Les, pondered for a moment, then shared that he sees the industry moving down parallel and sometimes conflicting paths. “On the one hand, as artificial intelligence and big data grow, there will be tools available ten years from now that we can hardly imagine today. While this influx of technology will contribute to data fulfillment decreasing in importance, at the same time, the legal, regulatory, and litigation environment will grow dramatically. I see screening firms being less focused on information fulfillment.

Screening firms may morph into being knowledge and compliance professionals that ensure that information comes to employers in ways that enhance the entire hiring strategy, and also facilitates the “gig” economy as the definition of work continues to change. Years ago, for example, IBM supplied machines. Now they supply solutions and strategic partnerships. I can see that happening in the screening industry.”

Taking the conversation back to him personally, Les shared that he has a series of author’s that he follows and read the moment a new book comes out. He recommends Michael Connelly, Daniel Silva, Russell Blake, Barry Eisler, Lee Child, Mark Dawson and Bernard Cornwell.

He surprised me with his answer about ‘who he would most like to meet’ by saying he would love to have dinner with Barack Obama and Donald Trump together. Les said, “I always admire success, and both of them have achieved unbelievable success, but in very different ways.”

Finally, before closing the interview Les shared his favorite quote, “Pay now or pay later” – meaning any shortcut you take today is likely to cost you much more in the future.

Thanks to Les for his insights and we wish him much success with his newest edition of The Safe Hiring Manual. 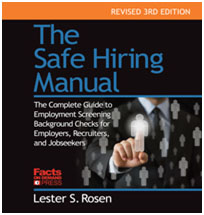