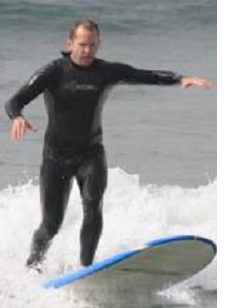 We invite you to sit back, relax, and join us for a great interview with: Barton Taylor, CEO, Tazworks

Did you know this born and raised CA boy had never surfed before? I didn’t. Only now he has. Last year he went with his kids and it was gnarly! Before coming to the background screening industry, Barton owned a printing company and sold business forms to credit agencies. At the time, he indicated he would often have the opportunity to interface with the people who ran these agencies and the software providers that they used. It wasn’t hard to see that the forms business was dying. He noted he had already been asked to help clients make electronic form overlays for their laser printers. Recognizing that he was essentially putting himself out of business, he decided to open a credit reporting agency in Salt Lake City, ironically using electronic overlays instead of forms. While growing his credit reporting agency, he suffered every time interest rates went up because business dropped despite his best laid plans. Looking for long term stability, he diversified into background screening in 1997. Growing and expanding the business brought his attention to the fact that his current background screening software was lacking. Realizing that his background screening company could not afford to fund their own software and that there was a need within the whole industry, he formed TazWorks. His first sale was to his own agency and then to his peers in the industry. In 2004, Barton sold the credit reporting agency and background screening company in order to focus entirely on his software. Reflecting, he said he is a serial entrepreneur, having started and grown seven different successful companies throughout his life.

Barton felt that credit reporting was fun when remote dial up was still the standard. He smiled as he talked about seeing all the blinking lights and hearing all the sounds the modems would make when a client would connect to his server. He knew it was the sight and sound of money coming in. When he transitioned to the internet in 1998, suddenly everything was silent. “I didn’t know what to do with myself and was a little depressed for months. I couldn’t hear myself making any money! As far as background screening goes, I have always enjoyed reading the interesting and off beat cases that come in. In addition to that, one of my favorite things about being on the software side of things is taking business calls and trying to figure out a software solution to meet the needs of the client. It’s like a puzzle and I’ve always liked puzzles,” he says.

“Our primary aim at TazWorks is to empower our background screening partners with the most Simple. Powerful.™ software in the industry. This is the mission that we focus on each and every day,” he told me.

In addition, TazWorks’ 2013 goal is to exceed the expectations of their clients. They look at their clients as part of an extended family. Collaboration is the power behind the screening tools and features they develop into their background check platform. They make sure that their clients are connected at all times. Their clients are constantly telling them how much they appreciate being a part of the feature development process. The clients’ knowledge, input, feedback, and suggestions have helped them to create the most simple, yet powerful background screening software available on the market.

He explains that they have a few industry-changing projects in the works that they are very excited about. Unfortunately, they can’t share anything just yet.

Barton tells me that this has been his most enjoyable business so far. He loves providing a great work environment for his team and helping his business peers succeed. One of the most pleasing facts about TazWorks has been its steady and predictable growth over the years, even during the recession in 2008.

I asked him what he sees coming ten years down the road in the background screening industry. He pondered for a moment and then stated, he sees more opportunity as technology becomes a much bigger part of the process. He believes that people will need technology to simplify things and facilitate automation.  Yet, he believes that background screening will also become much more of an art than a science and people will have to adapt to it. He also remarked that the good news is: it will not become a commodity.

Before closing the interview, I asked him what was a recent book that he had read. He said that he is currently reading a book called “Peopleware: Productive Projects and Teams” by Tom DeMarco. He has found the book to be very interesting because the whole premise is that it’s not all about technology, but equally the team you build; the people you hire are just as important in the software development process. He thoughtfully added that he would like to use this idea and include his clients. He feels strongly that they are also an integral part of the process and success